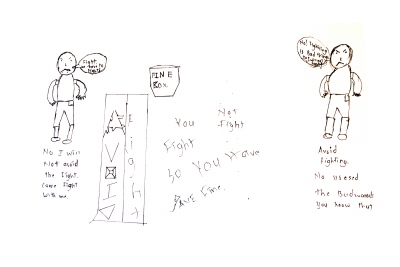 Aryan's first design for a 'debating not fighting' table 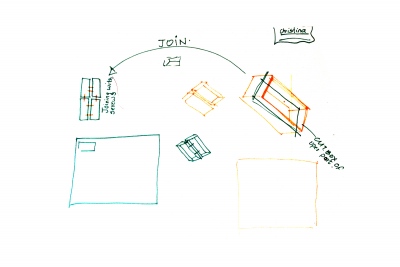 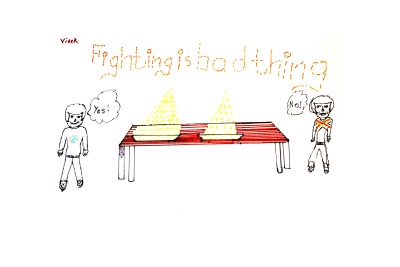 Vivek's first design for a 'debating not fighting' table

Sadik's final drawing for the recycling and wet waste bins

Aryan's first design for a 'debating not fighting' table

Vivek's first design for a 'debating not fighting' table

Sadik's final drawing for the recycling and wet waste bins 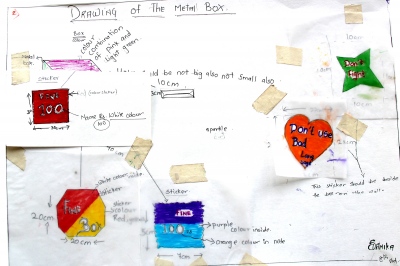 Back in the classroom we brainstormed design solutions, all the while being mindful of the local crafts we could work with. The children had identified a number of making activities located in the settlement mentioned above. The children developed rationales for their designs:

Mosquitos are cause for wide-spread concern in Mumbai, particularly in areas near to water bodies such as the neighbouring Lovegrove canal. The children each designed a mosquito net for use in the home. They decided to use tailoring and hand embroidery crafts: During their walkabouts, they had found a tailor who was making a wedding dress from fine net and intricately embroidered patterns. Inspired by these materials, first they designed a net for the window, door, bed, and also a net to cover food.

As Kevin Lynch points out 'the hunger for trees is outspoken and seemingly universal' [1] In Mumbai in particular, where trees and plants are often sacred (see tapestry key item 72), the attachment to ever dwindling green spaces in the city is growing in parallel to a sharp decrease in the number of trees, due to widespread development. In response to this, the children designed containers in which to grow small trees and plants. They designed a wheelbarrow made from tin, which would hold a tree, a hanging 'plant-bag' made by the bag makers, a green roof planter made from a tin box, and a tin planter on wheels.

The children felt they heard a lot of bad language in the settlement, and often saw people fighting, which made them feel uncomfortable. They worried about the effects on younger children. Their designs included banners spreading messages to 'avoid fight' and to 'not use bad language'. They also designed a ‘debating not fighting’ table, that residents who were angry with each other could sit at to converse. A wooden table, that would be piled high with fruits and sweets, with two chairs either side would provide a place to sit and debate. The first prototype table, based on the designs of Gulam, Shahid and Vivek and made by the hand embroiderer, was formed of an unused embroidery frame, and decorated with hand embroidered signage using sequined slogans advising residents to 'Avoid Fight'.

Drainage is a challenge in Mumbai, particularly during the Monsoon rains. The children identified difficulties faced when rubbish accumulates in open gutters, leading to blockages and resulting in flooding. They also highlighted that stagnant water trapped in gutters provides an environment for mosquitos to breed, often close to homes; and that young children playing on the ground could fall into the dirty water. They thought about metal grilles of various sorts to cover the open or broken gutters. They decided to use tin as a material for their intervention. Cristina proposed to use ready-made tin box lids fixed together, whereas Firoz and Ayman proposed welded iron rods or woven strips of tin to create a mesh.

Although city waste management is improving slowly, waste collection in informal settlements continues to be problematic. Waste should be segregated and collected separately, however composting is a sensitive subject as many believe it attracts snakes, rats and mosquitos. Today many schools are starting to teach their pupils about composting and waste management. Here, having highlighted waste as a settlement issue, the children looked at waste management in more detail. Tahera, Huda and Saba’s designs proposed to use 'chindi' (leftover cloth scraps) to create household covers for furniture and curtains or room dividers.